Bangkok is a port which makes it accessible by air, boat or train. It is the commercial centre of Thailand, as well as Southeast Asia, for imports and exports. This sustains Bangkok’s economy and it draws a lot of workers to the area. 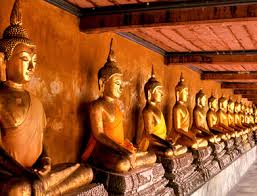 Top 10 things to do and see in Bangkok.

Why are people attracted to move to Bangkok?

People move to Bangkok because of its tropical weather, the exotic culture, the food, friendly people but mostly for work opportunities. Bangkok is great because it provides quality public healthcare, Bangkok provides a range of healthcare facilities, both private and public making it more of an attraction to live there. The climate of Bangkok is very tropical and very warm!

The main religion in Bangkok is Buddhism with 95%, so many of the customs in Thai culture are based on Buddhist values. Different customs in Bangkok are Respect for royalty, Wai- tradition Thai greeting. When visiting temples you dress properly.  Removing your shoes, festivals, Thai dance, Thai food, and Thai money. Housing in Bangkok is very much all apartments because with the vast population of 8 million people there are a lot of apartments and Condominiums. Parks in Bangkok are very scarce to find! As there is a very large population it is very hard to find parking spaces. The language spoken in Bangkok is mainly Thai and some English.

How has your city changed over time?

In mid- 19th century the west had a lot of influence over Bangkok causing missionaries, envoys and merchants to begin revisiting Bangkok.  By 20th century rural market zones in Bangkok began developing into residential districts. The memorial bridge was constructed in 1932 to connect Thonburi to Bangkok which is believed to promote economic growth and modernization in Bangkok. Bangkok has seen rapidly urbanization since its population hit 2 million in the 1960s. Rapid growth of the city continued through the 1980s and early 1990s, until it was stalled by the 1997 Asian financial crisis. But by then many public and social issues had already occurred such as massive traffic jams. Over time Bangkok grew and developed and still is developing at a rapid pace. As more and more buildings get built the more people travel and move to Bangkok. 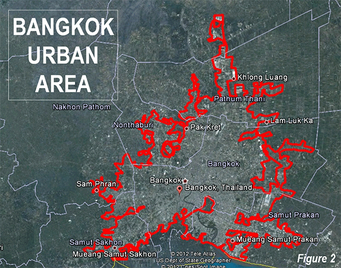 http://www.newgeography.com/content/003367-the-evolving-urban-form-bangkok
Analysis: Bangkok is going to grow very fast and quickly, over time it will grow North West and North East. There going to move in that direction because that's the only real area to grow and the land there is what a city wants.
How is it predicted to change over time? (Urban sprawl)

Bangkok is predicted to only grow more which is going to cause many problems for this unique city.  Bangkok is suffering problems from flooding and it is predicted that by the early 2030s, much of the city will be abandoned from floods. The explosive growth of Bangkok has caused massive infrastructure problems in the city.